Click HERE to access your patient portal account.
Please Excuse Our Progress Our Website is currently under construction to make it more user friendly and accessible to all of the communities we serve. 720 Hospital Dr. Andrews, Texas 79714 432-523-2200 Mission Statement: Permian Regional Medical Center strives to provide quality, compassionate and professional health care to our patients, staff, and the community through continual quality improvement and to be fiscally responsible to the Citizens of Andrews County. Vision: Permian Regional Medical Center’s vision is to maintain regional healthcare leadership in rural West Texas while providing quality care, at a cost-effective price. Vision will be accomplished through education of staff, new technologies, and through hospital strategic/business plan. Equal Opportunity: It is the policy of Permian Regional Medical Center to provide equal opportunity to persons regardless of race, religion, age, gender, disability or any other classification in accordance with federal, state and local statuses, regulations and ordinances. Career Opportunities *General Application *Nursing *Sabetha Health And Wellness Center *PRMC will conduct a criminal background check and drug screen prior to employment* Updated 11/13/2015 Please contact Human Resources at (432) 464-2307 for inquiries regarding the application process. You may also fax your resume to (432) 464-2180. 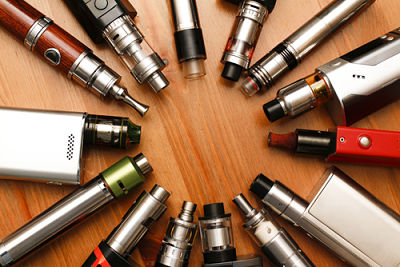 This is a picture of vapes in a circle
VAPING: The Facts

Youth vaping is a public health concern for several reasons. Nicotine is a highly addictive substance. Early nicotine addiction can harm brain development and alter nerve cell functioning, especially during fetal, early childhood and adolescent stages of development. Dual use of e-cigarettes and other tobacco products is present in about 63% of the youth surveyed. A vaping epidemic among high school students has been declared by the U.S. Surgeon General.

According to research, there are three reasons e-cigarettes may be particularly enticing to young people. First, teens believe that vaping is less harmful than smoking. Second, e-cigarettes have a lower per-use cost than traditional cigarettes. Finally, vape cartridges are often formulated with flavorings such as apple pie and watermelon that appeal to younger users. One of the most concerning things about the rise of vaping is that people who would have never smoked otherwise, especially youth, are taking up the habit.

The increased use in vaping is driven, in part, by the belief that vaping is safe and not addictive like cigarettes. However, the e-liquid in most vaping products contains nicotine, an addictive substance that impacts adolescent brain development. One of the most popular vaping products contains as much nicotine as a pack of cigarettes. Vapes can also contain other substances, such as tetrahydrocannabinol (THC) the main psychoactive ingredient in marijuana. Since vapes are currently sold without much regulation, e-liquid can be contaminated with unknown substances. There have been reports of illness. A major illness that can happen is hypersensitive pneumonitis. This happens when chemicals in the e-cigarettes lead to lung damage and inflammation, which trigger the body to mount an immune response. This immune response can lead to increased inflammation and 'leaky' blood vessels, which can lead to fluid accumulation in the lungs, sometime even causing deaths among people who vape.

For those who choose to vape to stop smoking cigarettes or just because it is "the thing to do", please talk to your doctor or call Sabetha Family Practice at (785) 284-2141 for an appointment.